A banner for their fame

Today's entry is dedicated to Alkonost, a famous deity of the slavic mythology. Half-woman half-bird, Alkonost flies from the sky to deliver the messages of gods, specificaly the good news. Her twin sister Sirin, who brings the bad news, is slightly less worshiped...

Alkonost peddles the fame of the heroes around the world of men. She is thus a reccuring character of the russian tales. At least in the versions illustrated by Ivan I. Bilibine (1876-1942), a sheer genius who issued some of the best pieces of art ever inspired by popular tales and folklore, where her presence personifies the narrative.

As the colour pattern of the dwarves is primarily inspired by the russian folklore, and despite the fact that I call them Anglo-Dvergish now, which is completly misleading, I thought I had to stick with this idea and try to craft an heraldry inspired by russian tales, for the warlord. Alkonost quickly springs to my mind, for she seemed convenient enough for my drawing skills.

Now the result might look a little cartoonish, although I do think it also holds some early medieval touch. I must say, I had a really relaxing time at painting this small piece. I somehow felt like a monk of the so called Dark Ages and it worthed doing this only for the time travel.

I really needed someone of trust to take care of such a precious handmade banner. Hence the reason I have adorned the bearer with a grey beard. He is probably the uncle of the warlord, the most trusted brother of his mother, the kind of tough nut who survived many feud in the past... 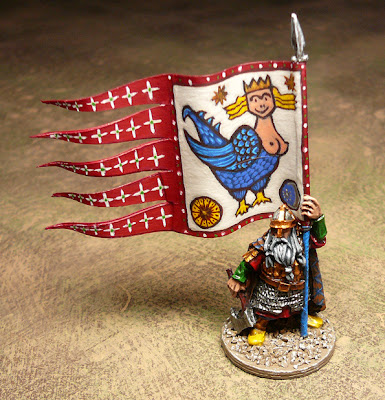 Two things have gone a little wrong. First of all, an hair of my brush got lost in the middle of the flag, and I could not remove it. I think one can really see it on this picture. 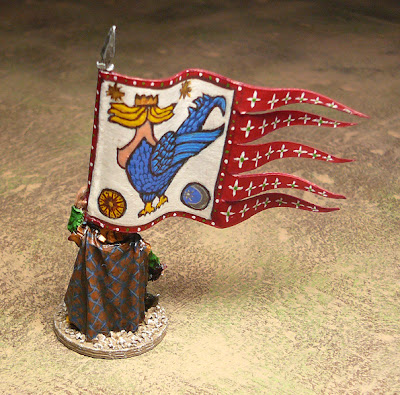 Second of all, for some reason my matt varnish has turned into a gloss varnish, so the mantle looks a little shiny... I probably did not shake the varnish enough... I'll have to come back to it later.