One SAGA, two SAGA, three SAGA... and more to come!


Here are some pictures (not so good, despite my photoshop's attempts) and an account of the SAGA afternoon, that John and I spend last saturday. With this report, I thought it would be interesting to comment and keep track of the mistakes we made and how we could have play better. At least from my own point of view.

As we are rather pragmatic people, we choosed to play the first scenario of the Rulebook for this first game: The Warlords. John took the initiative on the dice roll, so I had to deploy first. When it came to the Hearthguards, John decided to have both of them flanking my line from the left and the right, with the Ulfhednars ambushed in a bush of trees, really close to my Geburs, on the left flank.

John started by activating the Ulfhednar, and moving them towards the Geburs, but they could not come close enough for melee. He then activated his Hirdmen on the other side of the table and move them towards the closest group of Ceorls, but they were too intimidated, by the amount of filth spilled on them by the foe, to continue. Finally, He moved one group of Bondi towards the center of the battlefield. 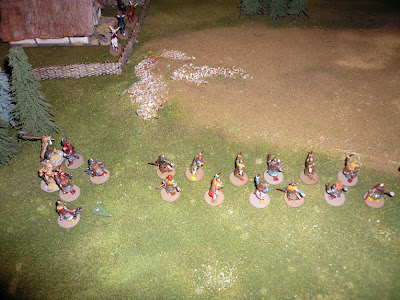 The threat of the Ulfhednars seemed terrifying for the Geburs, so I decided to shoot at them without waiting a minute. The Geburs achieved to kill two out of four, which looked like a good start. I then choosed to activate the Huscarls held in reserve behind their Warlord twice. They engaged melee but had to suffer from one Fatigue. Even reduced to an half, the wolf skins still get to throw 8 attack dice and I guess I had bad defense dice, for the clash of axes ended in a bloody draw: No one survived.

On the right flank, one ceorl was dispatched to stop the Hirdmen. 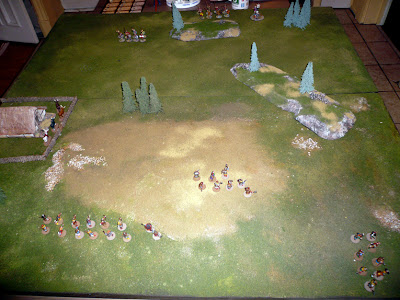 Here I think the Ulfhednars could have run to engage directly melee with the Geburs. Although they would probably have been interupted. Also I think we went wrong here with the Heimdall ability, that the Ulfhednars used during melee. We increased their armor value instead of reducing it. This did not really affected the outcome anyway, as the double-handed axes of the Huscarls balanced it.

At this early point, we both had lost our best men, which left us with one SAGA die less each, for the order phase. For one of my unite was a levie, the Anglo-Dvergish clould throw only four SAGA dice. I quickly learned how priceless is each one.


This time John activated his Hirdmen twice on the right flank, and managed to engage melee, despite the repeated intimidation of the Ceorls. The latter payed quickly for their insults, by loosing four brothers in this first clash. I recall they had formed a shieldwall with great haste, but this was not quite enough to stop the fierce charge of the Hirdmen. Again Heimdal was hammering hard with them. 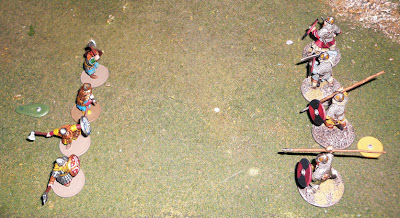 The remnant of our warbands rushed to the center of the field, and I hoped to be close enough to the coming Bondi as to be able to fire a new round of arrows the next turn. 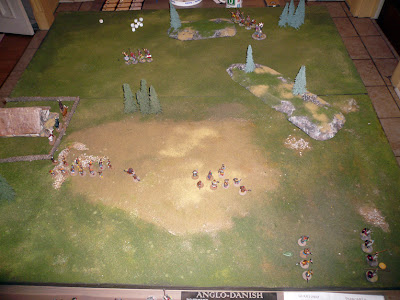 John promptly pursue his move towards the center. Is it at that point that I suddenly remembered that the goal of this game was not to be the first to reach the center, but rather to be the first to kill the opposing warlord...? I am not quite sure, yet it was sure that the Geburs were still not close enough to shoot their volley. Scarce SAGA dice, and the obligation to device some trick to counter the Hirdmen on the right, did not allow for faster movements. 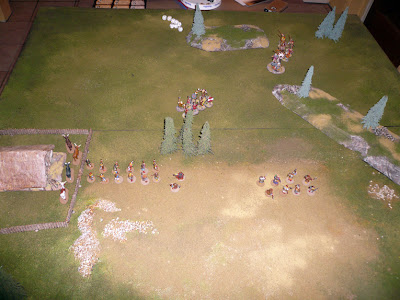 And trick there was, John has quite an advantage, as he was not gripped by a unit of levie and could benefit from one more SAGA die than me, which he uses to give rest to the Hirdmen, before they charge again. Confident, they surely were after a first victory, but self confidence is not a SAGA ability, and they had to suffer from a better prepared defense this time. Having spare a die on the Noble Lineage ability, I could change an horse for the axe I needed to bring my Ceorls Hard as Iron. This combined with one extra defence die and half of my dice spared for defence purpose was enough to repulse temporarly the invader and force a hirdman to bend on his knees. 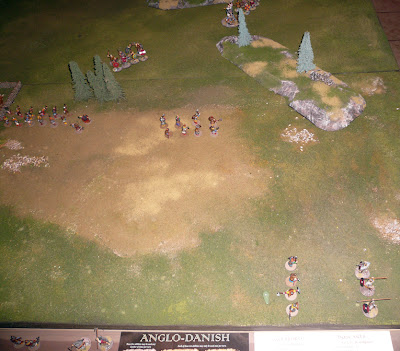 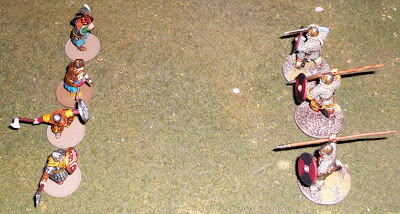 The Viking's Bondi were still regrouping to form a shieldwall between a bush of trees and a rocky hill. They were finally at range and the brave archers (you will soon know why I call them brave) could shoot their arrows for a second time. Helas, John used the cover of the trees quite cleverly, and only 8 Geburs could unload their bow. Obviously not enough, because not a single arrow reached its target. 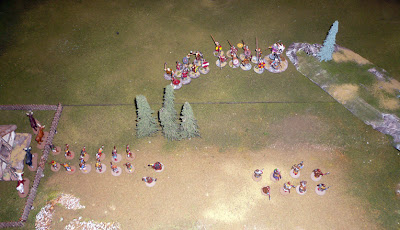 Then again the fight focuses on the right flank, where things were turning into a separate dog fight. For this turn I was fortunate enough to get an Helmet on my roll of two extra SAGA dice which allowed to add a shieldwall ability to a Hard as Iron and the extra defence dice. Things were getting hairy and two more hirdmen bit the dust. The loss of one more Ceorl was nothing compare to the pride of repulsing these nasty pillagers again.

Well, this time I caught myself in ubris, as I decided to get rid of them for good. With only one Hirdman remaining, the odds seemed to side with me. This was forgetting to fast that my power lay in my defense abilities, in fact, with the sacrifice of his last brave, John killed the last three of the Ceorls, and leave on this side of the field, nothing but a puddle of blood. 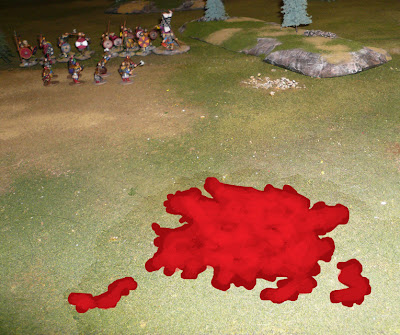 Thus nothing could distract us anymore from the action in the center of the battlefield. Here John had manage to bring steadily all his Bondi near my Warlord, in a fashion that really shows he had a clearer sense than me of the goal of this battle.

To repell the threat of the closest group of Bondi, I decided to threw my Geburs and the warlord against them. A good opportunity to try a more complicated type of melee. I recall it took us time to figure who should benefit from the Fatigue of one and an other. The Geburs fought with great bravery, loosing barely one man while four bondi fell to the ground. I remember I was quite happy with this result and the vision of John's warriors fleeing away... 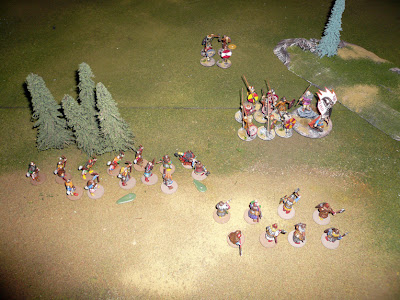 Yet, I have come to think that this turn was the turn of all mistakes and cost me a victory in the end. First of all, I should not have pursue the isolate Hirdman on the right flank, but rather wait for him to attack me one last time and hammer him for good. This would have left me the possibility to move my other Ceorl towards the center to cover the right flank of my warlord. Finally, this would have allowed to form a strong defence line by retreating a little the Geburs, thus building a wall of men to shelter my warlord behind. In the last turn the use of Intimidation and some good defense abilities would probably have won the day.

Either way, I only did not do this. Hence John did not hesitate a single second to rush on my warlord accompanied by a bunch of bondi. I can not really remember if the dice throw was tied, only one thing is for sure: none of the Geburs has jumped forth to save the life of his warlord, and the Ceorls were only to far. 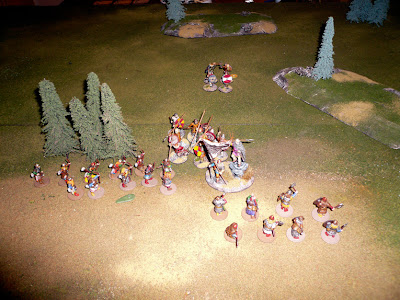 For the second game we picked the fourth scenario: The Challenge. We agreed to switch sides and John took command of the attroupment of short legs that I came to name the Anglo-Dvergish. Thus, I was leading the Vikings. The initiative dice throw was a draw, so, as the scenario states, John took the initiative, for he is way more bearded than me... 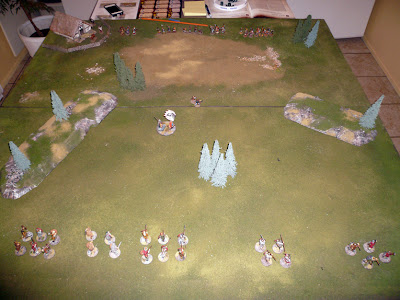 There they were, daring one and an other in the middle of the battleground, bolts of lights against burning flames in their eyes. We tested again for initiative and I took the opportunity to exhibit my muscles first. The Viking warlord ran at the Anglo-Dvergish, vigourous as a crazed bull, and after having inflicted four wounds, thanks to heimdal and an outrageous luck, he then called the ability of Thor to hit again. But nothing came out from this second assault.

John counterattacked swiftly with a combined movement of his warlord and a group of Ceorls, that ran from the line to rescue their chieftain. Yet after a quite sad dice throw, his warlord was compelled to move back, with two more wounds to his chest. Thus, he has allready reached six wounds out of twelve, at the end of first turn. 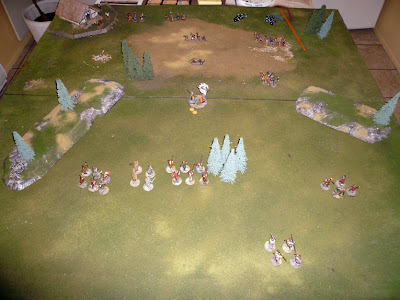 Following John's example, I spared enough activation dice as to draw the Ulfhednars from the line, and give chase to the faltering Anglo-Dvergish warlord. The foe tried to intimidate them, but they were filled with anger and only followed their thirst for blood. The hunt turned into a kill when my warlord joined the Ulfhednars for the feast. After adding all combat abilities, I had nothing less than twenty-six attack dice to throw, and, hum... The outcome was obvious. This was no longer a duel between two competing warlords, but rather a murder by stabbing. 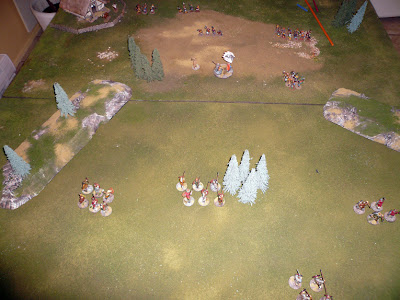 This time at least, I did not miss the objective of the game. What we have completly miss though, was to use the Fatigue markers to slow down the moves... My, it would have changed everything! A costly lesson I would say...

Somewhere in New-Foundland, or Vineland as they call it, the Vikings have settled a camp, and raised fences around their common house. Night is falling and a group of Viking foragers is on the walk back to the camp. Yet, hiding between bushes and mist, an unknown threat does not see these wanderers to fit well in the landscape. 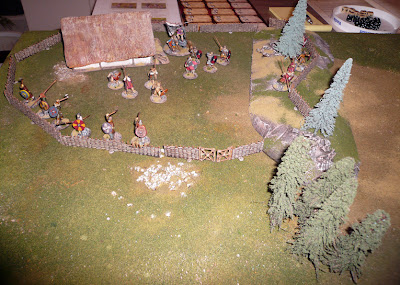 There won't be to much detail about this last game. It was the last we had in the afternoon, and we were getting a little tired. I had especially a quite abusive use of the Odin ability from the viking's battleboard. You know what? One can not use this one against javeliners since their shooting is considered to be a part of their movement. I tried out the Valhalla ability against a group of skraelings and could not achieve to wipe them from the table, instead, my Bondis were the ones to be wiped out.

John and I both agreed to say we should try this one again, with a fresher mind. And I am starting to have idea for a serie of scenarios for a quick campaign. So, lets not spoil this one now. 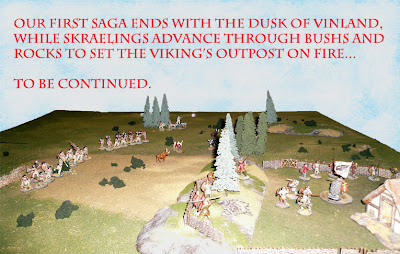