Today I'd like to present you Alyosha Popovich, the second horseman in the serie of the Bogatyrs, an other charismatic russian hero, who fought for the Tsar of Kiev. As with Ilya Mouromets, Alyosha is taken from the painting The Bogatyrs by Viktor Vasnetsov. Again the figure is from Plastic Miniatures company, and the design is just top notch, the figure was really clean and needed but very few preparation. The horse has been painted using GW paints for the robe and hairs, since their Bestial Brown remains one of my favorite color, and Army Painter for the saddle and buckles. 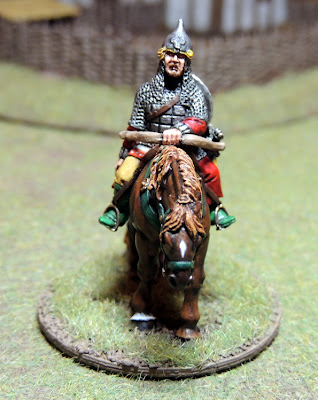 There is not so much to say about Alyosha than there was about Ilya. Mainly because, I believe the character of Ilya Mouromets slowly agglomerated the deeds of others around his rather archetypal person,in the oral tradition of tales and bylines. Alyosha Popovich, as his name indicates, was the son of Leonce the Pope. He was so strong when he was young, that when he played with other kids, he would often dismembered them by snatching an arm or a leg. One might think he really had trouble to make friend at school, but the tales indicate that it was only when he would separate a body in two pieces by the middle, that he would got into trouble, because then, his young friend would die... 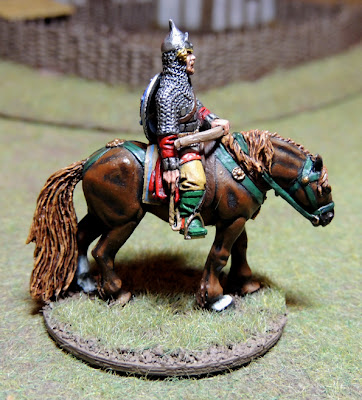 Fortunately, when he became a grown up, he was presented with some chap almost as strong as him, and they became friend without an injure. Thus accompanied by Marishko Paranovich, he decided to enter the service of Prince Vladimir of Kiev. In fact, as he reach the court, his strong arm proved promptly useful when the dragon Tugarin Zmeyevich came, threaten the city, insulted the Prince and claimed his crown. A dragon as his name Zmey suggests (i.e. russian word for dragon) or simply an infidel prince son of the tribe of the dragon (or the tribe of the snake), as there could have been among the Polovets steps riders during the XIth century. 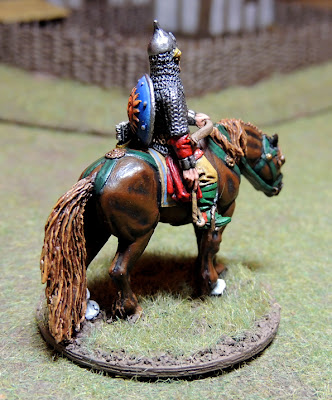 Wherever he came from, the dragon acted so crudely with the Tsar, that Alyosha took the opportunity to show his bravery and challenged him for a duel. Alyosha compared Tugarin to a cow that his father the Pope Leonce once had. The beast was so greedy that one day, she drunk a whole lake to the bottom, and eventually exploded! Then he prophesied that such outcome would happen to the dragon if he would not stop claiming a realm that wasn't his. Of course Tugarin the dragon took it bad and threw a dagger at Alyosha. And Alyosha to say: "Thank you mighty Tugarin for this dagger you give me! By it, I shall cleave your pale chest and bare your bitting heart!" 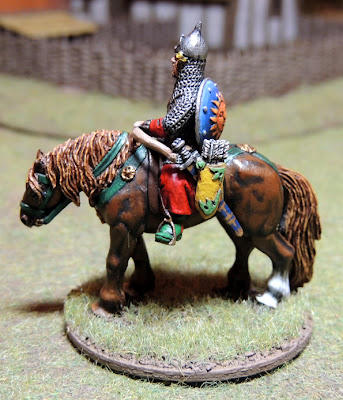 I think, he really meant so... Because, the day after, Alyosha eventually killed the so called dragon in the meadow right outside the walls of Kiev. Now, don't think it was that easy. The creature Tugarin was so evil, that Alyosha had to pray for the help of God. Alyosha may have been a really faithful knight, for God did show up this day under the disguise of an heavy rain. Well rain doesn't kill dragon, but since Tugarin's wings were of paper and coton, they became wet, and the monster could not flight and threat Alyosha from the sky anymore. Then, I understand it was as easy for Alyosha to cleave Tugarin's heart out of his chest, than it was to snatch a leg from an infant back in the good old days. 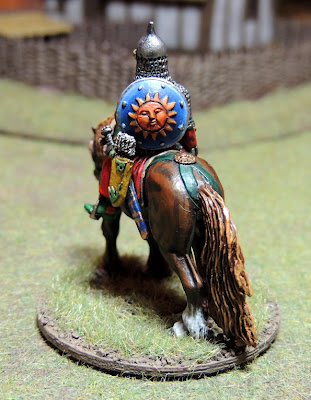 To be honest, I don't really understand what the paper wings symbolise, maybe the weaker faith of a pagan barbarian, but Alyosha surely did a great job by kicking this nasty vilain out of Kiev. For that my friend Alyosha you have indeed deserved your seat next to Ilya and an extra effort to paint your shield. I kind of think it looks a little overdown now, compare to Ilya's, but hell! I like it! Hope you enjoy it two! Next will be the last of the three Bogatyrs: Dobryna Nikititich...

Alyosha has granted me 10 more points in Curt's Analogue Hobbies painting challenge, and I am still the slower painter of this challenge. To give you an idea some of the contestants have already more than 1000 pts. Me, 21 pts!