New shields on the blog

Well, the title says it all. At first I thought I'd name these new shielded warriors New kids on the block... But this sounded way too absurd.

It's a relief to show these rough beards, since it took me quite long to finished them. I must say that painting shields directly on the figure, is a completly different story than painting them when they are attached to a flat cardboard.

In the end this new serie does not come out to bad. Only It has me sweating a little more. On the other hand, these are lead soldiers and after having been caught by the versatility of plastic figures, I start to feel more and more conservative as time goes by. 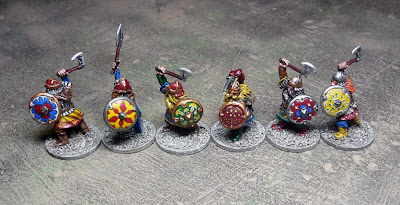 Now I really like the new patterns I tried with the mix of white, blue and red. Although it was hard to achieve regular curves (still need to improve on this soft spot), it seems to me that both shields looks quite fine, and have this bright eastern touch to them. But, I can't tell the same about my two attempts with the yellow, green and white designs. Not that I do don't like them, rather that they don't stand out as well as I expected. White against yellow doesn't make for sharp contrasts. 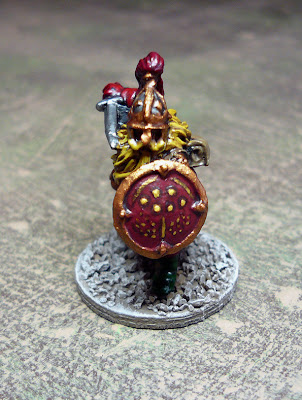 I tried to have a special attention on the shield above, since this character is supposed to be some sort of hero/captain/leader, or Drar if we stick to the LotR rulebook... Or is it Murin? Anyway, this one supposedly depicts a flower pattern taken again from a drawing by Bilibin. You guys tell me if you can see how the leaves and petals are arranged together. 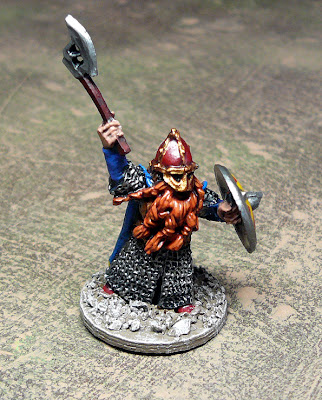 Last of the new cool kids. This bearded ten years old has some quite nice red facial hairs, isn't it? He was supposed to carry an ugly GW shield cluttered with carved crows. I thought a kid this age could not carry such an heavy piece of iron, so I went with something more handy for his infant arm.

That's it for the moment. Oh... and, please have a look back to my previous post. I have been adding new pics. Last time, I felt a little puny with the double-handed axes. May we keep this place colourful and friendly!